The Council engaged the NC community in various ways to ensure the Plan reflects the issues that matter most to North Carolina’s I/DD community.

The public comment period is now closed. The Council received responses from all over North Carolina about our goals for the next five years. NCCDD will now assess the comments and draft a final version of the Five Year Plan draft for approval by AIDD. The new plan will take effect starting October 1, 2021. 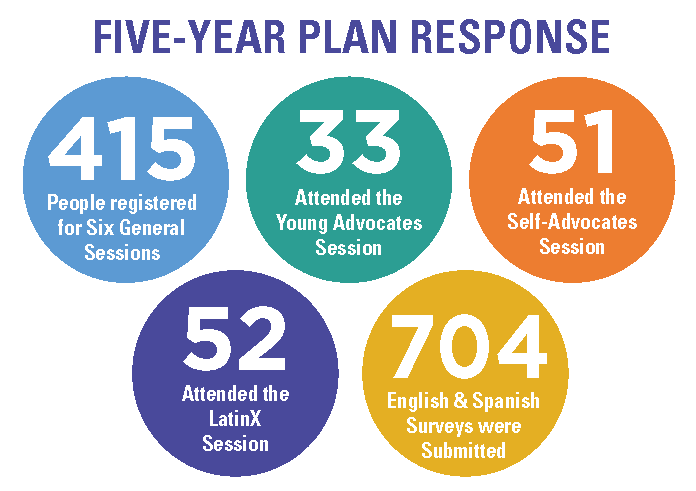 Listening Sessions: Due to the COVID-19 outbreak, NCCDD held its listening sessions, Conversations with the Council, virtually.

The council hosted six sessions – two per region – and 415 people registered for the events. Additionally, the Council hosted a session for the LatinX community, welcoming 52 people; a self-advocates and young advocates session, 51 attendees and 33 attendees, respectively.

Surveys: For more detailed feedback, the Council released a survey for individuals with I/DD, family members and community advocates to provide their thoughts on the upcoming Five-Year State Plan. The survey was available in both English and Spanish.

The Council’s current Five-Year State Plan, implemented in the fall of 2016, focused on three key goals of increasing financial security, community living and advocacy for individuals with I/DD. These goals impacted the selection of and funding for the Council’s multiple initiatives throughout the year.

What is the Five-Year State Plan?

Every five years, the North Carolina Council on Developmental Disabilities develops a State Plan that reflects a comprehensive review of major service systems and issues in North Carolina.

It outlines goals, objectives and specific activities that will be implemented to bring about change. The State Plan guides the Council regarding how staff and fiscal resources are allocated. The Council's State Plan is developed in accordance with the Developmental Disabilities Assistance and Bill of Rights Act of 2000 (DD Act).

The current Five-Year State Plan (2017-2021) was adopted by the 40-member Council and approved by the Administration on Intellectual and Developmental Disabilities (AIDD). Implementation began on October 1, 2016.