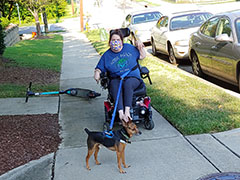 Kelly Woodall was just eight years old living with cerebral palsy when President George Bush signed the Americans with Disabilities Act (ADA).  Now, 37, she reflects on the impact of the ADA.  Kelly said, “I am thankful for the advocates before me that did the hard work to have less barriers.  They afforded me the ability to not settle, the right to fight for what I think is fair, and the courage to be brave.”

Kelly came through the doors of the Easterseals UCP Charlie Gaddy Center in Raleigh in 1985 when she was 18 months old. She received therapy, attended camp and recalls being part of WRAL-TV’s Telethons with Charlie Gaddy.

She’s come a long way since then.  Kelly has graduated from St. Andrews Presbyterian College, won the honor of Ms. Wheelchair NC and competed in Ms. Wheelchair America, started a consultant company and sits on the NC Developmental Disabilities Council.  Her latest passion is being a certified ADA Trainer.  She offers classes on financial stability, advocacy and the ADA.

Kelly believes the ADA is not a perfect system and needs improvement in the area of financial disparities. She said, “While disability and poverty have an interactive effect, our social service system treats them separately. For example, disability benefits often hinge on proving one is capable of work, but anti-poverty programs often have work requirements.”  Kelly explains how this relates to her life, “If I were to get a job using my college degree or get married, my income would be such that I would no longer qualify for the waiver which is where I get my services from.” Without services for her disability, Kelly believes she’d lose her job because the therapy and support are essential.

She is grateful to share her journey and successes thanks to the ADA advocates before her.  Kelly is especially thankful to her parents who she calls her role models. She said, “I have come to appreciate how well-rounded and stable my childhood was despite numerous doctors, procedures, and scary medical things that unfortunately come with disabilities.”  She vows to continue advocating for herself and others living with disabilities.

Join us in celebrating the successes of the ADA.

Celebrating the 30th Anniversary of the ADA

Read all the stories here or share your own ADA story.