Inside the Concept of “Birdability”
Print 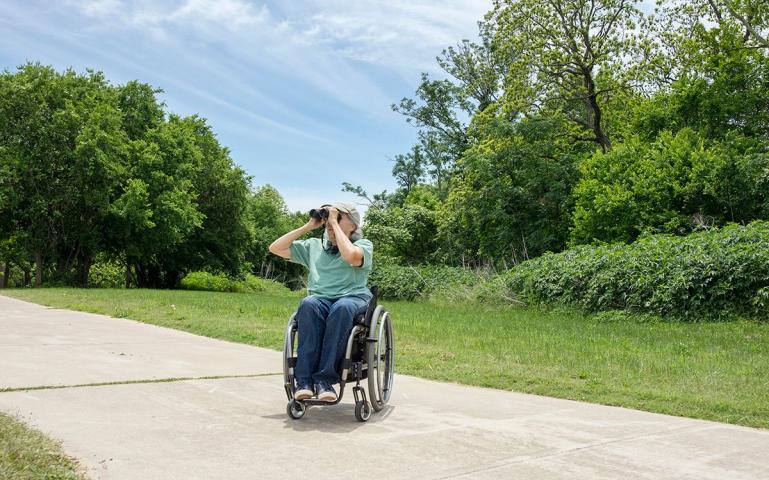 Seven years ago, while learning to bird in my small town on the coast of North Carolina, I found a local mentor with a background in zoology and a keen eye for all things wild. I’d let her know whenever I came across an interesting sighting, and soon we were swapping bird photos and location intel. One day, I told her I’d heard word of a common goldeneye duck—an uncommon visitor to our area—in a pond located about a quarter-mile down a local park path. My friend made her way along the small path gingerly, but it took us a long while—she was suffering foot problems. She made it to the pond that day, and we caught a glimpse of this fine duck. But over time, as her condition worsened, that path and its wildlife became inaccessible, as it was to anyone with a mobility issue. Even if she’d wanted to use a wheelchair or a walker, she couldn’t—the trails are narrow, unpaved, and often muddy. She adapted by photographing birds at local town parks with wide sidewalks or along the roadside, using her car as a hide.

That tough walk down the trail with her marked the first time I’d really considered what birding offers me—a chance to immerse myself in nature and escape the constant whirl-a-gig of my thoughts. I’ll venture onto a trail heavy with the concerns of the day and return restored. All I have to do is look at a bird, through binoculars or a camera, and whatever ails me starts to succumb to calm and wonder. It made me wonder about ways the park might be able to make special accommodations so my friend could more fully enjoy the birding experience, but after talking to experts with a unique perspective on accessibility, I understood my friend didn’t need accommodating; she needed an environment of inclusion. Here’s how to increase “birdability”—accessibility where there are birds.

Author and outdoorswoman Sandra Gail Lambert moved to Gainesville, Florida, in 1989. One of her favorite places to explore is the La Chua Trail in nearby Paynes Prairie. “Many thousands of sandhill cranes winter there among wild horses and buffalo, and you are bound to see pretty much all the Florida birds if you go throughout the year and often enough,” says Lambert, who loves the trail so much, she and her wife were married there. “In the summer, acres of American lotus bloom.” 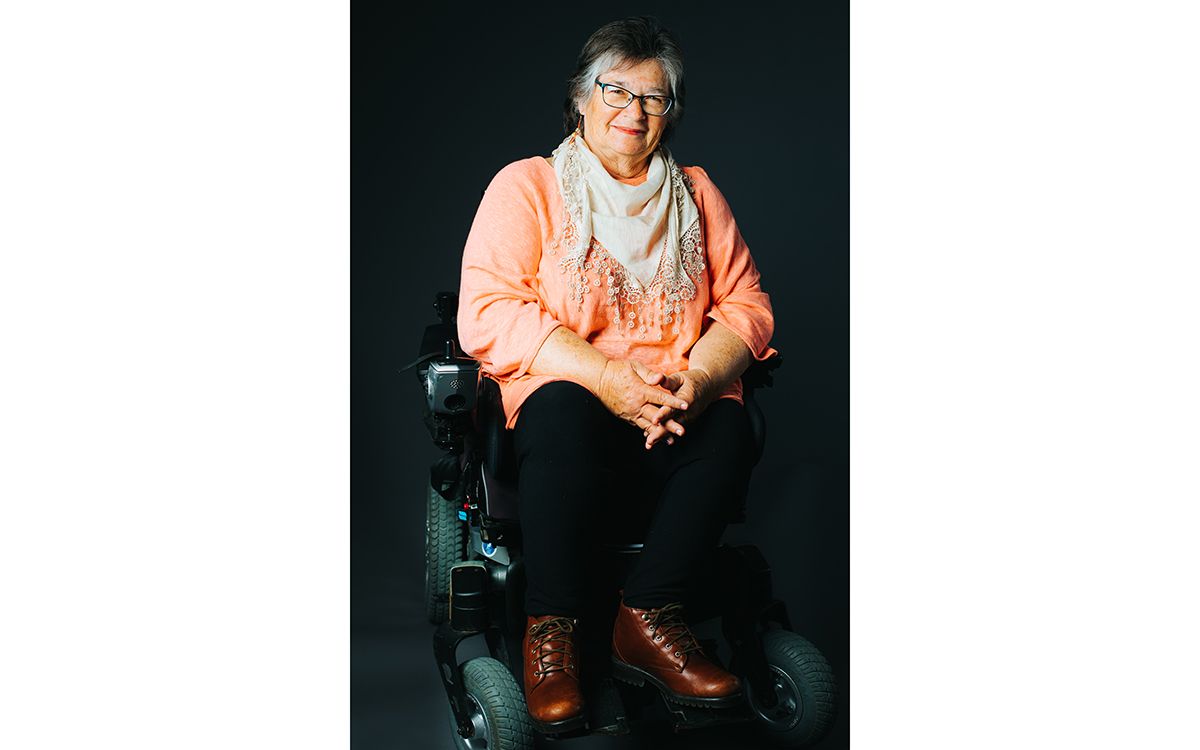 Lambert (pictured, right) uses a motorized wheelchair. Her memoir, A Certain Loneliness, recalls a childhood marked by a bout of polio and an adulthood spent adventuring in nature, including plenty of solo kayaking in Florida. “People make assumptions and think that people with disabilities don’t want to get to remote areas,” she says. “But I like to be alone in the middle of nowhere.”

Even so, she says what stymies her access to trails is mostly “the assumption that I, a person in a wheelchair, would never be in this place or that someone in a chair would never go this far down a remote path.” About 1990, Lambert was on the La Chua Trail, where “there were a bunch of suits out there having a meeting.” When they saw Lambert wheeling down the path, they turned to one another and chuckled. Lambert says that the one woman in the group approached her and “explained that they weren’t laughing at her, but at themselves.” The officials were discussing whether to put an observation deck at the end. The woman told Lambert the group assumed that they didn’t need to make it accessible here because ‘no one in a wheelchair would get this far.’ “Mind you,” Lambert tells me, “the trail is on flat terrain and only a three-mile round trip.”

She had an impromptu meeting with the group that day, telling them how she used the site and sharing where the best view was located. However, she says, she made the mistake of not getting their names and contact information, “so I could follow up and hold them accountable.” She says, “The joke ended up being on me, and the rest of us non-stair climbers, when they built a tall observation deck with steep, switch-back stairs in the very place I suggested.” Not only is it now inaccessible, but the railings on the entrance walkway are now at her eye level when seated in her wheelchair, and completely block Lambert’s view.

“I can’t see over or under that railing.” What galled Lambert most was that her favorite vantage of the prairie was blocked by the observation tower’s platform. She got excited in 2010, when “they planned to do some renovations on the deck—this time I pushed them to make it accessible.” She was told, however, that her suggested changes were below the threshold that would require ADA compliance. “When I get to the place where my access ends,” she says, “I’m still angry.”

One of the most visible advocates for inclusive and accessible natural spaces is birder Virginia Rose, who had a horseback-riding accident as a teen and has used a wheelchair for 47 years. About 17 years ago, she began to bird with the Travis Audubon Society chapter in Austin, Texas. “Though I was the only non-walking person, they just accepted me and no one ever discouraged me from trips.” Rose describes her birding experiences as profound. “In many ways, I felt I had finally come to my life. I felt that so keenly that I began to start thinking about ways I could help other people with mobility challenges get what I got out of birding.” In the 17 years that Rose has been birding in Austin, she’s identified 30-plus accessible places to bird in the city and surrounding area. 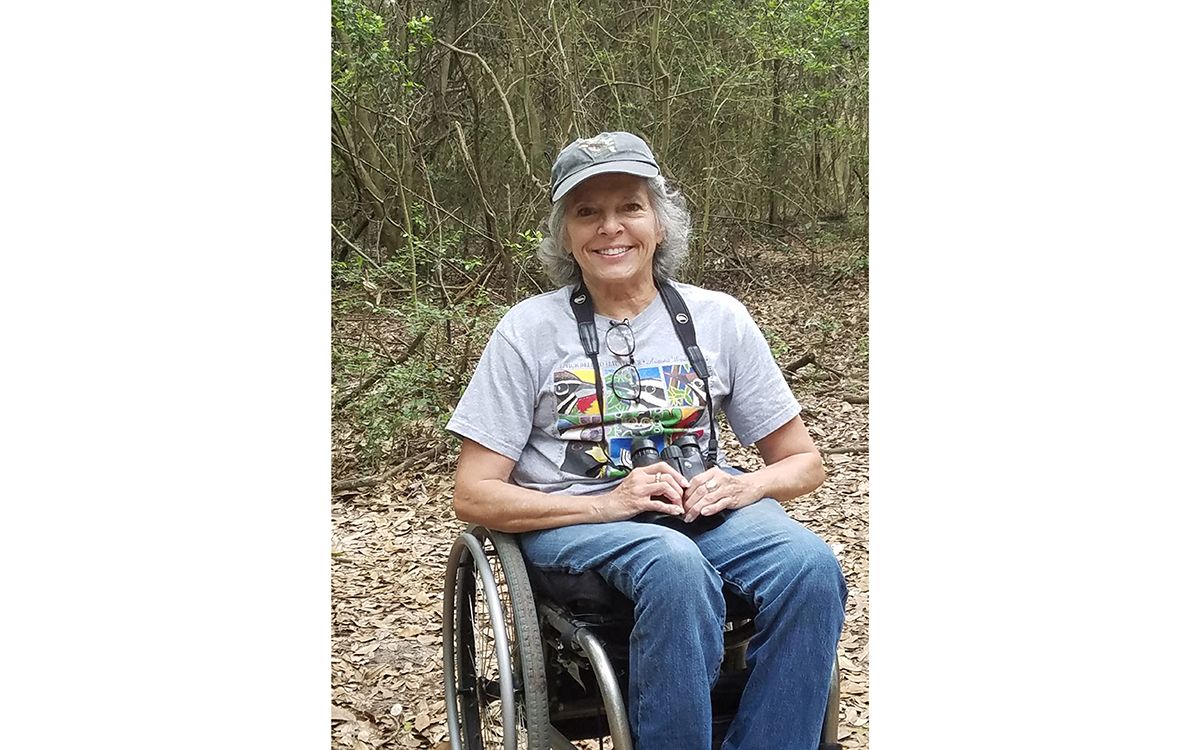 In 2018, to raise awareness of birdability, Rose (pictured, right) announced she’d do a solo Audubon bird-a-thon, which are typically competitive team events, held in the field. (Speaking of which, birders can still participate in the 121st annual Audubon 2020 Christmas Bird Count, a.k.a. the longest-running wildlife census in the world, until January 5.) “I never participated, unless it was something like a backyard bird-a-thon where I could just watch from my deck,” Rose says, “because I didn’t want to slow anybody down.”

So, she decided to bird from dawn to dusk. “I was determined to go by myself, mainly because I wanted to make the point that people who have mobility challenges need to be able to go unattended,” she says. “A lot of walking people don't understand that. They seem to think, ‘Well, if it's an accessible trail, they'll have someone to push them up the hill or over the steps or whatever, and it'll still be considered accessible.’ But that's not right: Accessible means you can do it by yourself.”

Rose’s effort attracted so much attention that the National Audubon Society sent a reporter to cover her event, and later, Audubon staff members Ryan Hobbs and Elizabeth Todd—with input from Rose—designed a real-time crowdsourced Geographic Information System (GIS) Birdability map through which people with disabilities can upload specific information about a location’s true degree of accessibility.

The idea has taken flight, so to speak, according to Audubon GIS fellow Abigail Krump, who assisted with the most recent Birdability map update. Krump has a unique perspective both as someone who has disabling chronic pain that impacts how she must move through various landscapes, and as a GIS expert. “A trail that has a steep incline or that has many tripping hazards, those aren’t just hindrances. They can cause physical harm,” she says. “Most able-bodied humans don't think about how these small things can be detrimental to someone else's health. That’s the beauty of the Birdability map; it returns power to the actual user so that they may make informed decisions before they arrive at a trailhead or park.” As soon as a user uploads their Birdability site review, it’s live on the site. “It’s empowering,” Krump says.

Perhaps one of the thorniest issues of accessibility is how to protect wildlife while allowing humans inclusive access. In Carolina Beach, North Carolina, for instance, a popular 3,000-square-foot beach mat—which was approved by the town in 2017 and is managed by an accessibility nonprofit called Ocean Cure—ran into problems with the US Fish and Wildlife Agency and the North Carolina State Coastal Resources Commission. The agencies claimed the removable mats, designed to afford wheelchair beach access, did not comply with the state’s existing rules regarding endangered species; in particular, the sea turtles that nest along the North Carolina coast.

It’s this sort of letter of law that has frustrated businesswoman Lorraine Woodward, who built a home in Carolina Beach specifically to accommodate her family—she and her two sons have limb-girdle muscular dystrophy—as well as mobility-challenged renters. “Vacationing was really hard, particularly on my husband, because, you know, we're a needy bunch and on a family vacation, he often felt like a caregiver. So we did not vacation a lot with the kids.” When Woodward visited Carolina Beach, she fell in love with the laid-back, shoes-optional vibe and built a beach home that can host a variety of people with mobility disabilities. “It even has a hospital bed, and sometimes people from hospice will come. It has a wetroom; it has everything in it that I and other people with mobility disabilities need.” 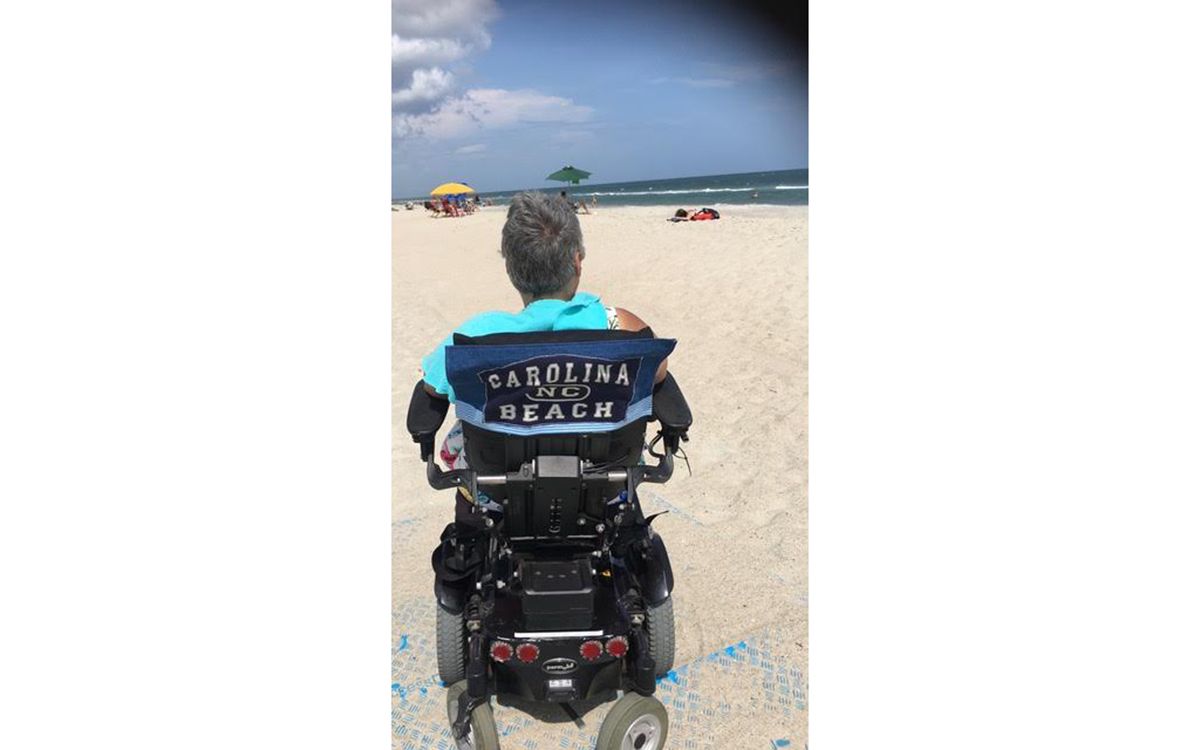 Carolina Beach had long had a beach wheelchair program, but not everyone with a mobility disability can use a one-size-fits-all beach wheelchair. Woodward says the beach mats (pictured, right) were life-changing—both in personal and business terms. Not only could she access the beach without assistance to watch the pelicans and people, but she could rent her beach home to others with disabilities, and even bring conferences to the town. “A couple years ago, I arranged to have the North Carolina Council on Developmental Disabilities meeting in Carolina Beach. They reserved around 40 rooms. And one of the reasons they chose to come was because of the mats.” So it was a blow to Woodward and her family, and indeed the entire beach community, earlier this year when the state forced their removal due to lack of compliance.

Kevin Murphy, who runs Ocean Cure, has been working with multiple agencies to seek a variance for the mats, but the argument against them is a thorny one. “How do we protect endangered wildlife while allowing humans more inclusive access?” Woodward puts it in starker terms. “I don't understand why turtles come first over humans. How many years have turtles been in this particular space? Is there a space near a beach access area where mats could go where turtles have not nested?”

Audubon’s Abigail Krump says the sweet spot could lie in the same technology that helped create Audubon’s Birdability map: GIS mapping. Krump says situations like these are ripe for a GIS suitability study to determine the best possible sites for the beach mats—data about beach access points, vegetation, and 10 years’ worth of nesting site data (maintained by a local sea turtle rescue and the state of North Carolina) could be used to create a GIS map. Could it allow for a possible win/win scenario for human and sea turtles? Only time will tell.

In the meantime, many birders with disability remain frustrated. Of her beloved La Chua Trail, Sandra Gail Lambert says, “I once passed 200 alligators basking on the side of the trail. It's where I went right after my mother died, and it's where I was married. Nevertheless, each time I get to the end of the trail, I fantasize the observation deck’s destruction by a hurricane or tornado, or perhaps me out there one night with plenty of mosquito repellent and a chainsaw.”