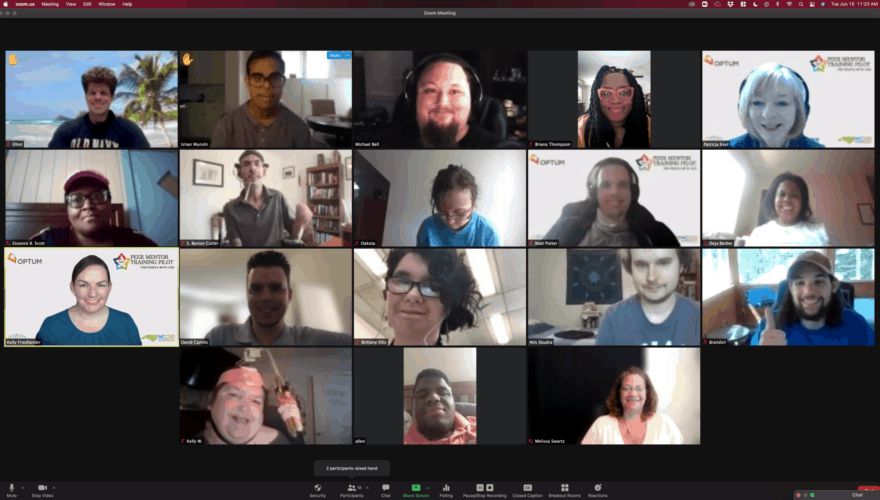 Due to COVID-19 precautions, the inaugural class of the peer mentor training pilot met over Zoom. Screenshot courtesy of Kelly Friedlander.
The health care world has begun creating formalized roles within mental health care for peer support specialists, people who can relate to and support others due to their personal experience. Now, North Carolina is piloting a program for peer mentorship within the intellectual and developmental disabilities community.

David Camilo is about to take a big step toward more independence as he moves into his own house soon.

Camilo, 36, refers to himself as someone with “high-functioning” autism. Right now, he lives in Morrisville with his parents and works for his dad’s entertainment business as a DJ and an MC for weddings, birthdays and other events. He’s also part of the inaugural class of 15 people graduating from the NC Peer Mentor Training Pilot for people with intellectual and developmental disabilities (I/DD).

North Carolina is one of the first few states piloting a program to certify people with I/DD as peer support specialists. Peer support is an emerging trend in the health care world that has been particularly effective in supporting people with mental health and substance use recovery issues.

When facing a challenge or trying something new, people often want to learn from and listen to others who have been through similar experiences, Camilo explained.

“I could just say, ‘I know exactly what you’re going through, I’ve been there, you know, when such and such happened. And it wasn’t easy for me either, but because I did this and that, you know, I’m sure you can accomplish it too if you set your mind to it,’” he explained.

He already has experience as a mentor at a program called Ignite, which offers educational activities and workshops to help people with autism gain social, financial and employment independence. Camilo really enjoys the role and hopes to find employment as a peer mentor for people with I/DD after his upcoming graduation from the pilot program. He said he would prefer to work in a one-on-one mentorship setting.

As the pilot program comes to an end, project director and instructor Kelly Freidlander is hopeful there will be a second class.

“What we are hoping to do is to show it as a promising practice, get some data behind it, hopefully get some success stories or vignettes from people who graduate and get jobs,” she said.

A seat at the table

With more evidence, Freidlander would like to present I/DD mentorship as a Medicaid waiver service and something that North Carolina’s behavioral health management companies — known as LME-MCOs — will include as the state transitions the Medicaid program to a managed care model. As part of that transition, the state is working on creating special “tailored plans” for people requiring more complex care, such as people with I/DD, low-income seniors living in care facilities and people with severe and persistent mental illnesses. Those plans are slated to roll out in 2022.

Freidlander sees a place for peer mentors on the care management teams that aim to work holistically with someone receiving behavioral health services.

“[Peer mentors] can make people realize possibilities that weren’t there. I think it can help people reduce their own limitations or reduce their limiting beliefs when they see another person who is successfully living in the community,” she explained.

Seeing a peer mentor who works or lives in the community — instead of with their parents or in an institutional setting — can also be reassuring for loved ones of a person with I/DD, Freidlander said. Family members often want to protect their loved one, but sometimes they can hold a person with I/DD back from things they are capable of, such as living more independently.

“I think it’s also a good check for the other professionals at the table. When you include someone who is similar to the person receiving [behavioral health] services, the dynamics and maybe the way the discussion happens, changes to be more person-centered and maybe a little more thoughtful,” Freidlander said.

“There’s also just too many critical issues happening that involve people with intellectual and developmental disabilities,” he said. “And one of the ways in which peer mentors can really get involved is through employment through peer mentorship, but also to be at the table when we’re when the state is talking about Medicaid transformation, the tailored plans, Olmstead planning and the 15,500-person waiting list [for Medicaid waiver services].”

A lot of interest

Wells said that he hopes LME-MCOs will include peer mentorship as a defined, billable service as they move into Medicaid transformation. The need and desire for formalized peer-mentorship for people with intellectual and developmental disabilities are evident, he added.

“What really blew me away is that we had approximately 100 people apply for this, so there’s a real hunger within the I/DD community,” Wells said. “Whenever I have conversations with providers, LME-MCOs, others involved in the system, there’s just an interest. And what a great thing for North Carolina to lead the way in this.”

Briana Thompson, 27, said she applied to be part of the pilot peer mentorship program because she wants to shape a better future for people with I/DD and mental illness and help dispel the stigma and misunderstanding around these diagnoses.

“I like helping for a cause since this is going to be helping people in the future that have similar experiences that I have living and dealing with a society that discriminates against people who are mentally ill or disabled and not able to do things that other people would normally have a capability of doing,” she said.

As a person who describes herself as having high-functioning autism, Thompson said she doesn’t let people stop her from pursuing her goals and encourages others to do the same. She aspires to have a career in 2D animation and is currently pursuing a fine arts associate degree from Durham Technical Community College.

Thompson said she’s continually impressed by her peers in the mentorship program. She added that a few participants have difficulty forming words, but they still speak out, get their point across and are heard.