May 2018: Highlights and Hot Topics
Print

The month of May started off with the second quarterly meeting of the North Carolina Council on Developmental Disabilities (NCCDD) in Cary, NC. At these meetings, we look forward to gathering together to work on initiatives and items that continue to focus on the goals and objectives of our Five-Year Plan by collaborating with great partners across the State! And as you know, the priorities of our plan come from you. We established our goals and objectives by paying attention to the priorities expressed by individuals with intellectual and other developmental disabilities, family and friends, and other stakeholders.

Currently in the second year of its Five-Year Plan, NCCDD once again invites you to provide feedback on the plan and our three focus areas of financial asset building, community living, and advocacy development. We invite and encourage you to review the Five-Year Plan and its goals, and share your comments here: https://nccdd.org/the-council/five-year-plan.html

Now, for a few other updates including the EveryBody Works NC campaign, the annual NCCDD awards recognition and a quick update on the May and August meetings of the NCCDD:

Next week Mandy Cohen, Secretary of the NC Department of Health and Human Services (NC DHHS), will head to Asheville to introduce EveryBody Works NC in the western region and to raise awareness of the value that people with disabilities bring to the workforce. The event, “Exploring the Possibilities with EveryBody Works NC”, will be held at the Lioncrest Restaurant at the Biltmore Estate on May 30th. To register, please send your name and email to ewnc@nccdd.org

We know that NCCDD is as strong as its statewide community. That is why, every November at our annual meeting, the Council honors the significant contributions made by advocates who are working passionately to change attitudes and support greater choices for a more inclusive North Carolina. The nominations for the 2018 Advocacy and Leadership Awards is officially open!

The awards include the longstanding Jack B. Hefner Memorial Award and Helen C. “Holly” Riddle Distinguished Service Award. Additionally, the Council has launched the North Carolina Leadership Achievement Award to recognize self-advocate leadership across the State. We look forward to recognizing some well-deserving advocates at our November meeting. Read more below and please submit your nominations, spread the word around your community and network, and let's honor our State's great advocates!

Finally, during our May Council meeting, members approved funding for several new initiatives and two Requests for Applications (RFA) have officially been released. The Council is seeking applicants for these two new initiatives surrounding employment and advocacy. Read below for more details.

And, in August, we hit the road! The Council is traveling to Asheville for our next NCCDD Council meeting. We look forward to seeing you there! As always, we want to hear from YOU. What are your ideas? Share them with us and join us on our social media spaces, attend our meetings and events, or connect with us.

Council member Kerri Eaker and her son, Dakota, joined fellow Council member Cheryl Powell and her husband, Billy, at the 2018 Disability Policy Seminar in Washington, DC. NCCDD Executive Director Chris Egan, Systems Change Manager Melissa Swartz and Public Policy Specialist Erika Hagensen rounded out the NCCDD contingent – part of the 30+ attendees from North Carolina and over 900 advocates from across the US. Advocates from across North Carolina worked in partnership to educate and inform lawmakers about key issues facing individuals with I/DD here at home. Together, we met with staff and lawmakers from over 12 offices.

Conference presentations and policy fact sheets are available to view.

On May 18th, the House was unable to pass the Farm Bill, which includes funding for the Supplemental Nutrition Assistance Program, or SNAP (formerly known as food stamps.). If it had passed, the bill would have markedly reduced benefits for individuals and families who experience food insecurity. The failed bill also included increased work requirements with few resources to support beneficiaries to get and keep a job, especially for individuals living with disabilities. We will continue to follow this bill closely.

SNAP helps individuals with disabilities in a number of ways. Click here for more information on SNAP in NCCDD’s April Highlights and Hot Topics.

Federally funded state grants (known as Money Follows the Person) to identify and support individuals who wish to leave institutional settings for community-based living has yet to be reauthorized. MFP has significant support from individuals and families as well as states: Individuals can live in community with supports, and states dramatically reduce the cost to support an individual. Without reauthorization, participating states will no longer have the funds to continue this program. We are watching carefully at the federal level and will keep you updated.

The legislature is in short session and their hope is to adjourn by the end of June. We are waiting for the budget, which is expected to be out soon. We are hoping to see additional resources for Innovations (Medicaid I/DD services) and concerned about further reductions to some state funding for I/DD servcies and supports. It appears that this budget will be passed as a conference report instead of a regular bill. This means that there will be no amendments and it may be voted on as early as next week. We will keep you informed as we know more.

The other item we are waiting on is House Bill 403 which is the bill that needs to be amended in order to allow the Department of Health and Human Services (DHHS) to proceed with implementation of the Medicaid Transformation. Specifically, DHHS needs authority to move people with mild to moderate mental health needs out of the Local Management Entity/Managed Care Organization (LME/MCO) system into the Medicaid Standard Plan. This will begin a process of issuing Requests for Proposals (RFPs) for commercial plans to bid on the Standard Plan and pave the way to more specifically define the Tailored Plan. The bill may come up this week.

We are also monitoring some bills related to school safety. House Bill 934 includes some positive language around increasing counseling services available in schools. However, one section mandates the creation of ‘Threat Assessment Teams” that assess and intervene with students who display behavior that is a threat to safety. Once identified, a student’s criminal and health records can be accessed. We are monitoring this in relation to protecting the rights of students with disabilities.

This session is moving quickly and we will try to keep everyone as updated as possible!

EveryBody Works Comes to Asheville! 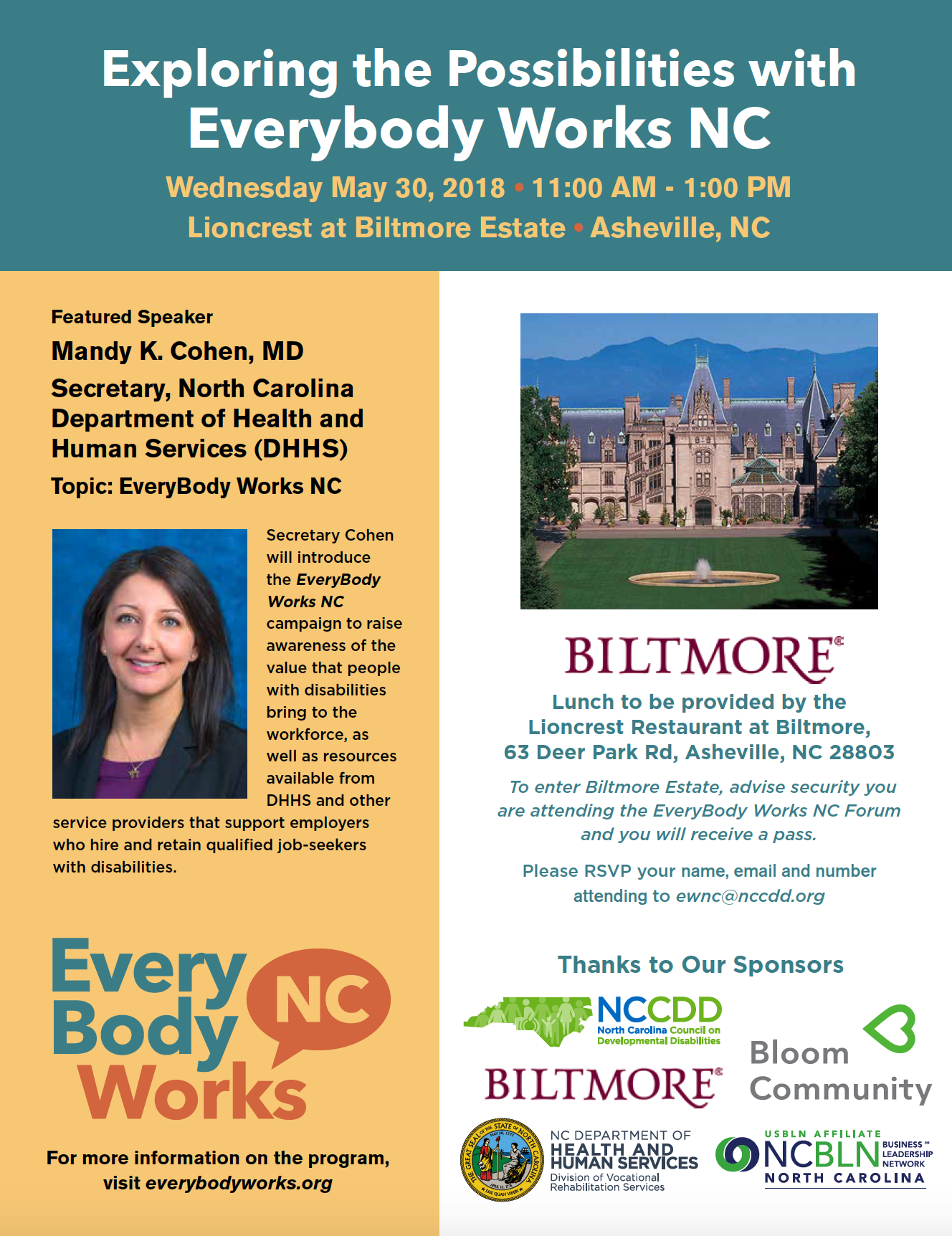 Exploring the Possibilities with Everybody Works NC will take place on May 30th at 11 AM at the Biltmore Estate in Asheville, NC.

Secretary Mandy Cohen will introduce the EveryBody Works NC campaign to raiseawareness of the value that people with disabilities bring to the workforce, as well as resources available from DHHS and other service providers that support employers who hire and retain qualified job-seekers with disabilities.

Please RSVP your name, email and number attending to ewnc@nccdd.org

Every five years, the North Carolina Council on Developmental Disabilities develops a Five-Year Plan that reflects a comprehensive review of major service systems and issues in North Carolina.

The Five-Year Plan (2017-2021) was adopted by the Council and was approved by the U.S. Administration on Intellectual and Developmental Disabilities (AIDD). Implementation began on October 1, 2016, and has been well underway. It outlines goals, objectives and specific activities that will be implemented to bring about change across the State for people with intellectual and other developmental disabilities.

The Five-Year Plan guides the Council regarding how staff and fiscal resources are allocated and is developed in accordance with the Developmental Disabilities Assistance and Bill of Rights Act of 2000 (DD Act).

Now, the Council is seeking the public’s comments/feedback on its Five-Year Plan. Review the Five Year Plan and its goals, and provide your comments by June 30, 2018.

To review and submit your comments, visit https://nccdd.org/the-council/five-year-plan.html

Nominations for the 2018 Advocacy and Leadership Awards are now open and the Council is seeking nominees from across the State. Hosted by the North Carolina Council on Developmental Disabilities (NCCDD), the awards include the Jack B. Hefner Memorial Award and the Helen C. “Holly” Riddle Distinguished Service Award.

The Jack B. Hefner Memorial Award recognizes individuals, family members or volunteers who are advocating and building a better North Carolina for people with intellectual and/or other developmental disabilities (I/DD). The Helen C. "Holly" Riddle Distinguished Service Award recognizes professionals who have made lasting contributions towards improving opportunities, breaking down barriers and promoting increased quality of life for people with I/DD.

A Request for Applications (RFA) is the way the North Carolina Council on Developmental Disabilities (NCCDD) asks for proposals for initiatives that will help the Council achieve the goals outlined in its Five-Year State Plan. This is achieved through the distribution of funds for initiatives and activities to a wide variety of contractors and agencies.

For more information and how to apply, visit https://nccdd.org/initiatives/apply-here-for-open-rfas.html

Governor Cooper not only knows Smith, but knows about his daughter, Moira. Moira has pontocerebellar hypoplasia type 2A (PCH2A). It is a genetic disorder that was diagnosed through the NC Genes research project at UNC-Chapel Hill Children's Hospital.

“Children with PCH2A,” explains Smith, “lack a protein necessary for the cerebellum to properly form. As a result, they appear to suffer from severe cerebral palsy. They have difficulty swallowing and breathing, have low muscle tone, and suffer from seizures and dystonic attacks (where the muscles flex and relax in an uncontrolled manner, causing severe pain).”

“I decided to take the opportunity to get involved [with the Council] so that I could advocate not just for my daughter, but for children across the State,” Smith said. “I feel the best work of the Council is its repeated focus on becoming more accessible to the Hispanic/Latino population. Ultimately, access to services comes down to access to information. It is essential that the Council communicate with the disabled population throughout North Carolina, no matter what language is spoken in the home,” he added.

Smith earned his Bachelor and Master’s degrees from Duke University and his law degree from the University of North Carolina – Chapel Hill. He feels the most important thing the Council can work on is to connect resources to individuals with disabilities.

“There are so many great organizations throughout North Carolina that provide services to folks with disabilities, but sometimes it is not clear who does what. Healthcare services are only becoming more complicated, and the overlap between healthcare and the personal assistance required by individuals with disabilities is only growing. Navigating that complexity is something the Council can assist with by not only funding new initiatives but serving as a clearinghouse for information,” Smith explained.

Smith comes from a long line of cooks and bakers and he enjoys cooking and baking for his family. “I like to think that I have a special talent for pie, since I grew up just north of Adams County, Pennsylvania, which is known for its apple orchards,” Smith said. In addition, he enjoys hiking and camping.