A Message from Our Executive Director

Celebrations bring out our passion, and that is no more evident than during July as we celebrate the anniversary of the Americans with Disabilities Act (ADA). The ADA turns 27 years old on Wednesday, and advocates have been sharing their passion of what the ADA has meant to them personally across our great State.

Nearly 30 people gathered in Burlington, NC for the ADA Train-the-Trainer session that put training and power back into the hands of grassroots organizations throughout North Carolina. Armed with a new toolbox of information, participants returned home to begin sharing their newly acquired knowledge with their co-workers and community groups to broaden the impact of the ADA. We’re watching for great things as our new trainers share the wealth of information they received at the training sessions led by the Southeast ADA Center.

Many grassroots groups in our State are actively educating and advocating to call attention to the ADA to encourage and collaborate toward positive changes in their own communities such as the Self-Advocates of Mecklenburg and the Western NC Self-advocates. Their work on accessibility in public restrooms, campgrounds and more has succeeded in permanent changes. You can read more about their work and impact below.

It’s always impressive to see the results of actions by self-advocates to reach out to their state and federal legislators with such deeply personal stories. Self-advocates worked to call attention to the importance of Medicaid and what could happen if changes in this program are not carefully considered in relationship to major changes in overall healthcare. Self-advocates, parents, caregivers and community members shared their powerful stories of how the changes could drastically impact their lives, their health and their well-being. Catch up on the latest state and federal update in our Public Policy section in this newsletter.

As always, we love hearing from the community about your thoughts, events and even your ideas on what can make your community a more inclusive place to for people with I/DD to live, work and play. Contact us here.

On July 25, the motion to proceed to debate on the healthcare bill passed 50-50, with Vice President Mike Pence called-in to break the tie. Senator Lisa Murkowski (R - Alaska) and Senator Susan Collins (R - Maine) voted no along with all of the Democrats. The Senate will now to turn to substantive debate, and a vote on the actual bill towards the end of the week. NCCDD will continue to provide updates as they become available.

North Carolina General Assembly adjourned but will come back for a special session in August and likely again in September. While there are some items still under discussion, the budget and special provisions were finalized.

Establish Birth - Three Interagency Council including members from Dept. of Public Instruction and Dept. of Health and Human Services, as well as members from public agencies representing early childhood interests. The goal is to develop and implement a statewide vision for early childhood education and transition from preschool to kindergarten. This Council may also make recommendations on organizational structure.

H478 - Required Experience for MH/DD/SAS Qualified Professionals (QPs) - Changes requirements for QPs to count all years of full-time work regardless of when the experience was obtained. Previously, only experience gained following the earning of a college degree was considered. This law will need a state plan amendment in order to be implemented.

H630 - Rylan’s Law/Family/Child Protection and Accountability Act - A bill to redesign foster care to provide more consistency across the State by requiring the establishment of regional collaboration and supervision, and reform of the child welfare system. The goal is to create higher quality and support for children in foster care.

BILL IN CONFERENCE (still under discussion)

H403 - Behavioral Health and Medicaid Modifications - This bill passed the Senate, but the House did not approve the changes that the Senate made to the original bill. The bill was sent to a conference committee, but no agreement was reached before adjournment. It can come up again in one of the special sessions.

The bill passed by the Senate made several modifications to laws related to the LME/MCOs and Medicaid including capitated contracts with Prepaid Health Plans for Medicaid recipients. This is the bill the Department of Health and Human Services (DHHS) was hoping would allow the implementation of the Specialty Plans and integration of physical and behavioral health. We will continue to monitor this bill in special session.

Melissa Ortiz was appointed by President Trump to serve as Commissioner of the Administration on Disabilities on June 12, 2017. Ortiz describes herself as a compassionate conservative who is enthusiastic about working with both sides of the aisle on behalf of Americans with disabilities. Throughout her life, she has been an active advocate for people with disabilities, working to ensure people with disabilities have the opportunity to fully participate in society.

She is particularly passionate about improving employment opportunities and eliminating barriers – such as a lack of accessible public transportation – that can prevent people with disabilities from being able to work.  Since earning a bachelor’s degree in criminal justice and broadcast communications in 1989, her career has included teaching in the Tennessee public school system and a variety of roles in government and politics. In 2011, she founded Able Americans, and through that organization has worked as a consultant on disability issues.

A native southerner who has spent periods of her life in Atlanta, Nashville, Jerusalem, and New York City, Ortiz now lives in Washington, DC with her husband Tony and her service dog, a dachshund named Annie Oakley.

It’s been 27 years since Congress passed the Americans with Disabilities Act (ADA), the first comprehensive civil rights law addressing the needs of people with disabilities in the United States. The ADA prohibits discrimination in employment, public services, public accommodations and telecommunications where people with disabilities are concerned. While community impact because of the ADA has seen some changes, there is still a lot of work to do for full inclusion and integration for people with disabilities here in North Carolina and around the country.

As a result, the US Department of Health and Human Services created and funded a national network of 10 ADA Centers to provide a wide offering of services including training individuals to return to their communities to train groups, organizations and other individuals on:

In North Carolina, approximately 30 people gathered in Burlington, NC for an ADA Train-the-Trainer session led by the Southeast ADA Center, headquartered in Atlanta, GA. During the workshop, participants learned about the history and purpose of the ADA Trainer Network and its curriculum, reviewed all 60 training modules; took an in-depth look at the employment module; and discussed how to build a customized training. The group also worked together to develop a training plan. 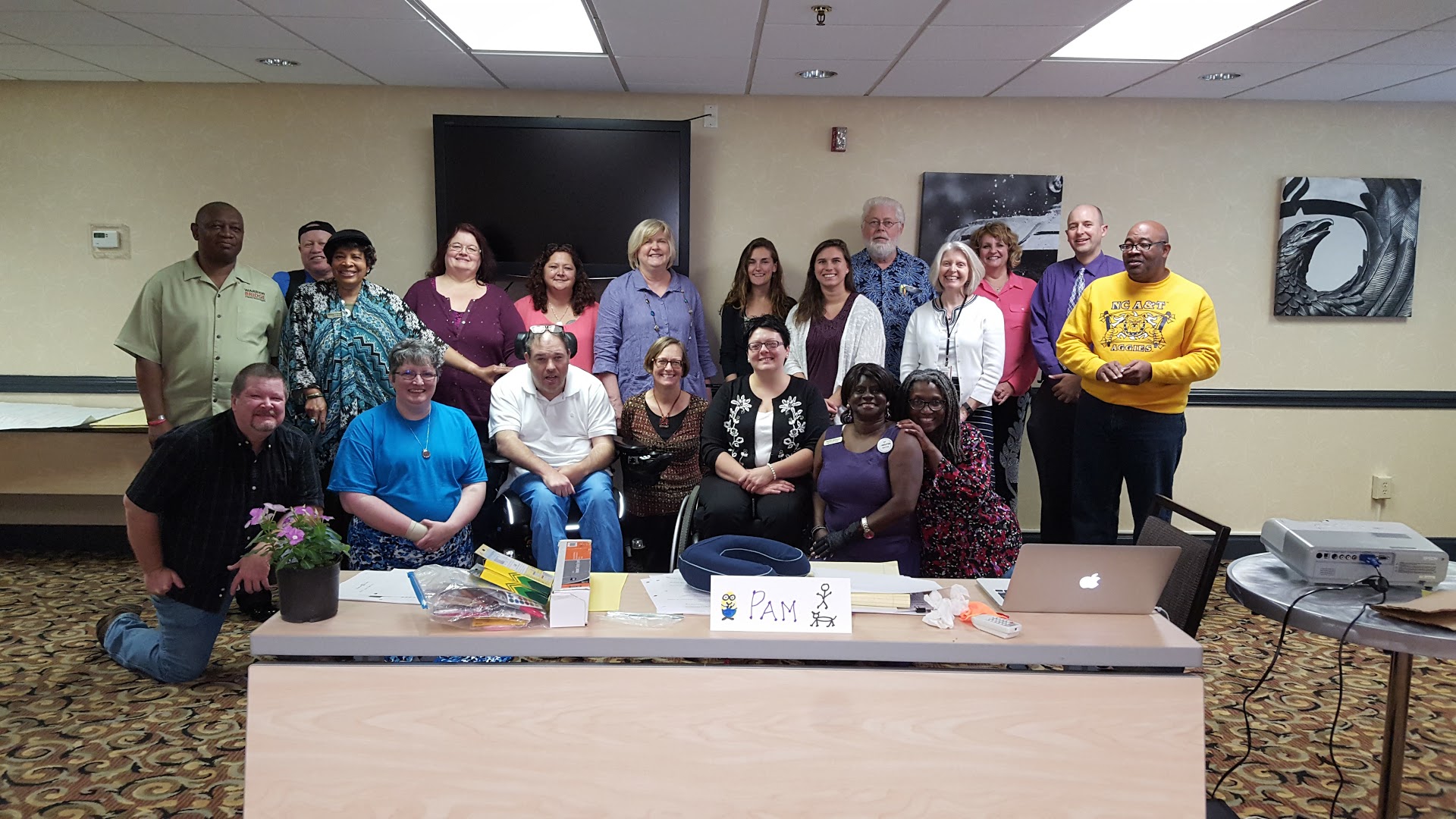 This workshop provides attendees with a toolbox of information to take back to their communities. The training returns the power to grassroots movements throughout the State.

“When people with disabilities speak with people who have responsibility under the ADA law to make improvements, it starts a conversation, and we see more positive results,” explains Pam Williamson, assistant director of the Southeast ADA Center headquartered in Atlanta, GA. “We work closely with our affiliate leadership network in each state to train individuals in local communities.” In North Carolina, its network partner is the North Carolina Council on Developmental Disabilities (NCCDD).

“The beauty of our training model is that anyone can use it. We set it up to be flexible for the trainers at the level they each are comfortable doing,” she added. So, when 44-year-old Jonathan Ellis of Murfreesboro, NC, walked in for the training, he knew his intellectual and developmental disabilities (I/DD) would provide an added dimension to what he was about to learn.

Kim Stewart from Louisburg, NC and a disability consult for Tar River Transit also attended the training. “I have trained recipients of vocational rehabilitation services how to be better prepared as they navigate the world as a job seeker, which is the name of one of the modules I used,” she said. Additionally, Stewart will be training bus drivers and other transit staff later this year to support people with disabilities who use public transportation.

“Excellent customer service is paramount to any successful business and in the world of transit this is critical. As more people with disabilities use public transportation, the training is key to ensuring our transit staff and drivers know how to best serve transit customers with disabilities. I will also focus on Title II aspects of service animals and transportation stop announcements. As a travel trainer, these are two areas of major compliance concerns I often see that need addressing,” she added.

Stewart says that even though the ADA was signed into law in 1990, the message of accessibility and equality can always use more people to spread the word.

Also in attendance at the workshop was Stephanie Johnson, a staff development vocational rehabilitation program specialist for the Division of Services for the Blind. She plans to use the workshop information primarily during her agency staff trainings, especially the employment-related modules. As a result, Johnson hopes the training will provide a heightened awareness of the ADA and provide a way her staff can instill self-advocacy skills in their clients as well as see improved communication with businesses and potential employers.

The ADA Centers in the nation are quick to explain they are not an enforcement agency. The training and materials are intended as informal guidance, not as a determination of legal responsibilities and rights regarding the legislation.
However, results are being noticed and measured. Williamson points to the curriculum being used with training law enforcement officers in various areas.

Those police departments are seeing a drop in complaints when it comes to the handling of incidents concerning service animals and interpretation services. Groups being trained through the Southeast ADA Center include youth and individuals with disabilities, Centers for Independent Living, parents and educators of students with disabilities, Chambers of Commerce, Senior Recreation Centers, Departments of Parks and Recreation and Tourism Departments.

If you are interested in more information or attending a free train-the-trainer workshop, contact the Southeast ADA Center at 1-800-949-4232 or at ADAsoutheast@law.syr.edu or visit www.ADAsoutheast.org.

#ADA27: Advocating for Inclusion and Integration

July 26, 2017 commemorates the 27th anniversary of the Americans with Disabilities Act (ADA). NCCDD shares stories of self-advocates who are making a difference around the State of North Carolina. Read them here:

Thank You to Our Council Members

The North Carolina Council on Developmental Disabilities’ mission and vision is fulfilled by the dedication and hard work of our Governor-appointed Council members. We would like to acknowledge the following members who have completed their appointment after two four-year terms.

We are deeply thankful for their hard work, dedication and passion to improve the lives of people with I/DD and their families.

NCCDD Celebrates the ADA at Sassafras All Children's Playground 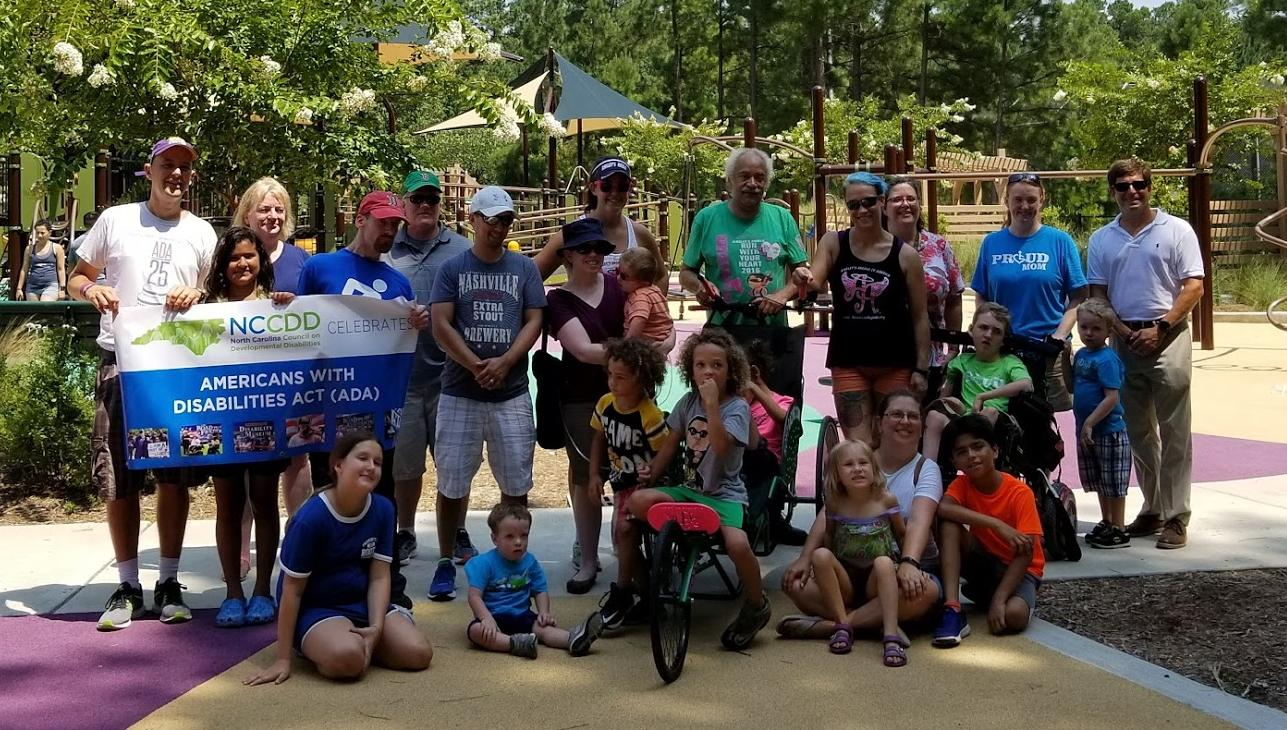 On Sunday, July 23, NCCDD hosted a ADA 27th anniversary celebration event at the Sassafras All Children’s Playground in Raleigh, NC.

Families marked the anniversary of Americans with Disabilities Act at inclusive Raleigh park. Among those who participated were the Hildreth family, who leads the Accessible Icon project around North Carolina; Emergency Preparedness I/DD Grant Coordinator Greta Herring; Lori Palen, a community member who lives in Cary and has a son with a developmental disability; and Ginny Moorefield, an ASL interpreter who has a son with a developmental disability.

The event was covered by WRAL-TV.  Watch the event coverage here.