It’s officially summer! We hope that the summertime and sunshine brings you time for rest and relaxation.

And summertime means that NC Council on Developmental Disabilities (NCCDD) has officially opened the nominations process for its upcoming 2019 Leadership and Advocacy Awards.

These three awards are given annually to very-deserving advocates around the state. Read all about the awards below and nominate a very-deserving person by August 5.

NCCDD is compiling a list of celebrations and events for this anniversary to feature on our website. If you know of any happenings to celebrate the ADA Anniversary, send the information to us at info@nccdd.org.

As always, we want to hear your ideas. Complete the online form here and share what you feel the NCCDD show know or consider working on for the I/DD community in the State.

Thank you for all you do for people with disabilities in North Carolina!

Education
A bipartisan group of Senators recently introduced the Respond, Innovate, Succeed, and Empower (RISE) Act (S.1585). This bill would streamline the disability service eligibility process by requiring institutions of higher education to

Health Care
The Department of Health and Human Services (HHS) released a proposed rule which weakens its regulations implementing Section 1557 -- prohibiting discrimination on the basis of race, color, national origin, sex, age, or disability in health programs and activities receiving federal financial assistance -- of the Affordable Care Act (ACA). Some components of this proposed rule include narrowing protections for all people experiencing discrimination under the law, eliminating protections for LGBTQ people, and rolling back protections for people with limited English proficiency.

In an effort to strengthen the ACA, the House of Representatives passed H.R.987, which reverses HHS regulation expanding the use of short-term limited-duration insurance (STLDI). Unlike plans sold on the Exchange, STLDI plans are not required to cover people pre-existing conditions, can charge higher premiums based on age, gender, or health status and more. Additionally, this House bill restores funding for consumer outreach and education programs and the Navigator Program, which were cut by the Administration.

1) Establishes a National Commission on Disability Rights and Disasters to study the needs of individuals with disabilities, older adults and others with access and functional needs throughout emergency preparation and planning, disaster response, recovery and mitigation, and

2) Provides financial support to develop and provide technical assistance and training to state and local emergency managers as well as disaster relief agencies.

The Disaster Relief Medicaid Act (DRMA) (S. 1754, HR 3215) would ensure that Medicaid-eligible individuals forced to relocate due to a disaster maintain access their Medicaid supported services.

Legislature
Last month, an overview of the House budget was provided in HHT, and the Senate budget was not released yet.  Since then, the Senate budget has been released and a Conference Committee was appointed to work out the differences in the two budgets. The budget is expected to be approved early next week. Highlights of budget items include:

In general, with the exception of the Innovations Waiver slots, the House includes more provisions for people with I/DD. The hope is for the final budget to reflect the House version and include more Innovations slots similar to the Senate version.

Bills to Follow
HB 619 - An act to establish a Rethinking Guardianship Workgroup to study and recommend changes to current guardianship statutes. This is in line with the work the Council has been doing related to guardianship. PASSED HOUSE. Expected to move through the Senate.

Medicaid Transformation continues to move forward with Standard Plan expected to launch in November. NC DHHS is working with the Prepaid Health Plans (PHPs) on development of their networks of providers.

The Tailored Plan is being developed with a projected launch in July 2021. There have been a series of white papers issued, with the most recent paper being on case management. 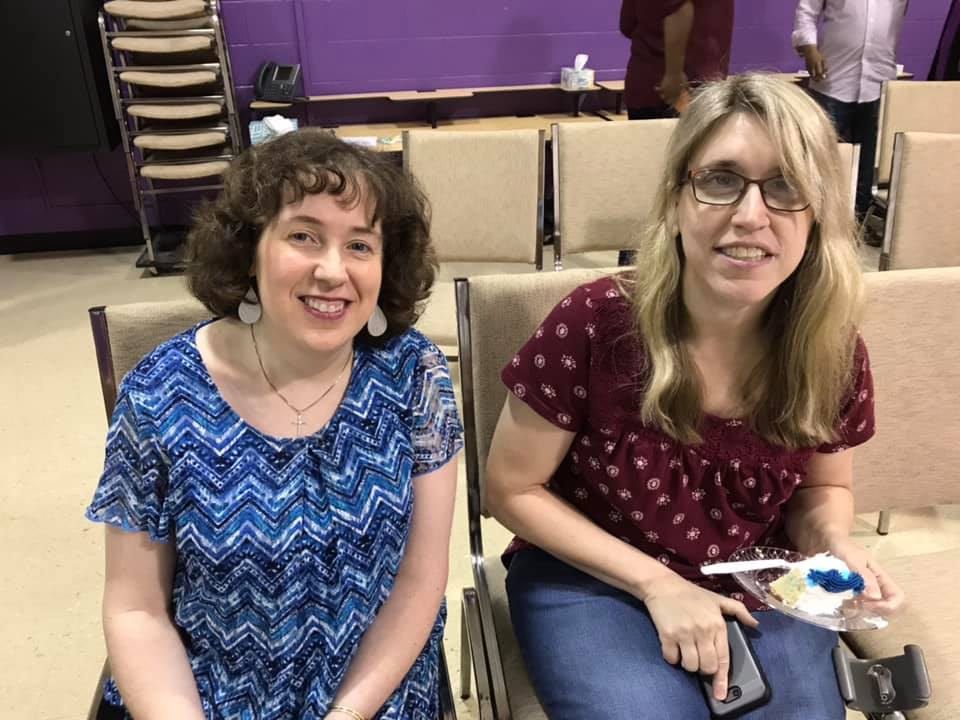 GCPA Program graduates from the 1980s, Susan Kirkman and Denise Greeson.In 1949, Greensboro resident Minnie Lyon Bennett gathered parents of children with cerebral palsy to plan a school for their youngsters, eventually becoming the

On June 3, the organization invited graduates of their program, families, and community leaders to commemorate its 70th anniversary, a testament to what an asset GCPA has been to the Greensboro community.

GCPA’s mission is to serve children, ages birth to three, who are experiencing a wide variety of severe developmental delays and complex medical issues, not just those related to cerebral palsy. The kids work with teachers to meet some or all their developmental goals.

Sara Nachtrab, executive director, said, “Back in 1949, for the community parents and the Junior League to have the foresight to embrace children with disabilities was unheard of. That, along with the school system opening up space for these children was amazing. To this day, we have the support of the school system.”

Governor Roy Cooper honored the GCPA’s anniversary with a letter addressing the significant benefits provided by GCPA and said, “The countless stories of families who have been positively impacted by this outstanding organization are a testament to the association’s commitment to serving its children.”
Visit GCPA’s website for more information.

Nominations are now open for the 2019 North Carolina Council on Developmental Disabilities Leadership and Advocacy Awards. The awards will be given to those who best exemplify self-advocacy, building a better inclusive North Carolina and those whose professional work improves opportunities for people with intellectual and/or other developmental disabilities (I/DD).

NCCDD Launches Conversations with the Council

NCCDD has launched a new monthly video series called "Conversations with the Council" featuring Council members sharing about their advocacy and Council work, peppered with personal stories about their journey in the world of intellectual and/or other developmental disabilities (I/DD).

The episodes feature Council Members sharing their journeys with each other, and sharing how the Council has impacted their growth as an advocate.The episodes release on the last Tuesday of every month on
NCCDD’s Facebook page. View the latest installment of “Conversations with the Council”.

Senator Mujtaba A. Mohammed (D-Mecklenburg)
has been appointed to NCCDD by Governor Roy Cooper.

He, along with 39 other Governor-appointed Council members, will work
to identify problems facing the community through its five-year planning process and
fund innovative projects and initiatives that promote the goals of the Developmental
Disabilities Assistance and Bill of Rights Act (DD Act) for all North Carolinians.
Read more about Senator Mohammed and what he hopes to achieve on the Council.